The Deen Crush and Kink Obfuscation

Graphic sexual content ahoy.  If you're not cool with that, read no further!


Deen is not supposed to be the star of his scenes—his sex partners are. But on Tumblr, a network of teenage bloggers*has emerged to turn the focus on him. The young women trade Deen videos, post candid photographs, and pluck out all the minute details that turn them on: the way he looks at a woman, touches her, stares into her eyes, whispers in her ear. “There was just something about the way he moved,” Emily says of her first exposure to Deen. He seemed to be “speaking to the girl, but not with his mouth, with his hand over the girl’s throat, and with his eyes.”
Deen’s young fans gush over the sight of him thrusting into a woman while holding her hand. They sigh over a private photo of a clothed Deen commuting by plane. They create animated GIFs of Deen’s greatest moves so they can watch him execute them again and again and again without rewinding. They pepper their Deen fantasies with Harry Potter jokes and circulate them to other girls. Several propose marriage.

Cue the moral panic: teenage girls are not supposed to be sexual, they're not supposed to enter the clubhouse where the boys are.  ABC's Nightline did a feature on Deen, with all the hand-wringing expected when young women decide they're into sex.  But, as usual, the people who are most concerned are the ones who aren't hearing anything the young women are saying.  When interviewed, the young women report that they like how "normal" Deen is, how his scenes border on romantic. Tumblr swoons when he kisses a girl.  All the innocence that the Concerned Adults are worried about stays firmly in place, even after viewing all that porn.  Make no mistake, there are a lot of naked-bit .gifs, but they're often accompanied by expressions of longing for the person, not the act, and when he does something that makes the girls uncomfortable they're vocal about it.  One wrote that the money shot, the one thing you can count on in porn, isn't something she'd want to do in real life.  Given how internet savvy most young people are, it's likely they'd have found an interview which he says he respects his partners' limits.  "[For example] there’s no reason to choke somebody if they don’t like getting choked," he says. "Then you’re basically being an asshole." Much is made about Deen's boy-next-door looks, but he's not superstar handsome. The important part is that he's a part of a sexual context for teenaged girls in a way that the Biebers of the world aren't. The Deen Crush validates their human nature, that being a teenager is a hormone filled hornball experience, while letting them squee about those big blue eyes.  Sex, as it turns out, doesn't ruin a damn thing.**

I'm as obsessed as the teens, for ostensibly different reasons.  The connection is that as women we can't stop watching because it's all hard to believe. Something for us? Really!? It wasn't meant that way, it wasn't pitched that way, it's not even produced that way, but that's how it ended up. I think it speaks to an idea that men and women are not very different after all. It turns out that women also like to watch.  However, unlike how porn is traditionally experienced by men, the women who are into James Deen are talking — a lot. There's ownership of interest. It's not shameful and private, it's shared and memed. 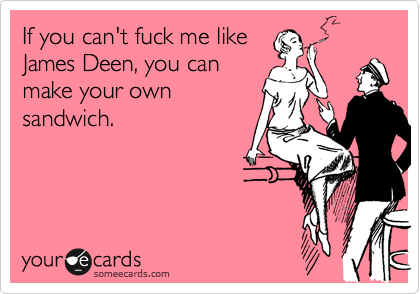 
“I’ve been into rough sex pretty much my whole sexual life and so I’m not, like, bad at it,” Mr. Deen told me by phone last month, on his 26th birthday. “I don’t know how to say it without being a hideous prick, but I’m pretty good at having rough sex. It got to the point where a lot of girls who aren’t into that type of sex were afraid to work with me because they thought I was going to slap them in the face or something.  But I only do that if the girl is into it."


*They might be teenagers, but that link is absolutely NSFW.
** Through all this, I totally acknowledge that there are teenaged girls who aren't into that at all. How could I not?

Thanks for this post! It's so refreshing to know that I'm not alone in my Deen crush :)

Hi Emily,
Thanks for commenting, I'm glad you liked it. I've been thinking about this whole phenomenon for a while. It's a really interesting moment for young women I think. There's some level of empowerment here that's surprising, and really great. :)